Does being really strong have a positive effect on one’s performance in the Ridge Run? Common sense says yes. Just make sure to understand strength and take into account size or weight when comparing strength between different people. My focus for 2016 is to get stronger.

Strength is the Ability to Generate Significant Forces

Correcting the Definition of a Strength Runner

The running community tends to confuse strength with endurance. Most runners and running coaches wrongly define a strength runner as someone that can endure a steady effort for a prolonged period, but are not necessarily fast or able to generate the high forces needed to accelerate. In actuality, this type of runner lacks strength, but possesses endurance. Endurance and strength are different qualities. You can have both and need to train both.

Here are a couple examples of inspiring endurance athletes that are true strength runners:

Max King, 12th in recent US Olympic Marathon Trails, former World Mountain Running Champ, current Warrior Dash World Champ and countless other accomplishments is undeniably very strong and can be considered a true strength runner. Guess who is Max King in this photo.

Hunter Mcintyre may weigh 200lbs, but can run fast enough to set a course record on a recent XTerra half marathon. He is obviously strong enough to move his large frame (atypical for endurance athletes) fast enough to compete with runners weighing 60 to 70lbs less. He once was a Logger in Montana spending time here as a troubled teen in a hoods in the woods program. Find the time to listen to this fascinating interview of Hunter:  http://www.richroll.com/podcast/hunter-mcintyre/

One of my main goals for last year, 2015, was to overcome chronic back pain. One step I took to accomplish this goal was to remove bread (gluten) from my diet. Gratefully, my back pain improved as the year went on. I can’t definitively say eliminating bread from my diet relieved my back pain – as I took other steps such as avoiding long periods of sitting that probably helped. But one thing I can say is that eliminating bread resulted in me losing weight. Not that I needed to lose weight, but my weight dropped to a level that I had not seen since I was a teenager back in middle school 45 years ago! If there is anyone out there that wants to lose some weight, try not eating bread.

Being lighter typically translates to being a faster runner. There is less weight to carry and propel down the path so it makes sense that you have to work less and can go faster. Well this is only the case if your strength remains the same as you lose weight. Speed will improve by increasing your strength to weight ratio. On the other hand, if you get weaker as you get lighter, you are not doing yourself any favors as your strength to weight ratio does not improve..

Recapturing the Strength of Youth

45 years ago, I was a very strong and active youngster. It was common for schools back then to annually conduct standardized fitness tests. The goal for students was obtaining a Presidential Physical Fitness Award. I remember some of my scores such as number of pull-ups, push-ups and sit-ups. I figured that since I was as light as I was 45 years ago, I should be able to do the same number of pull-ups. Shockingly, last summer, the number of pull-ups I could muster in a row was only one tenth of the number I could do 45 years ago. In comparison to my former self, I was very weak even though I was exactly the same size. Humbling, but also scary. What happened to me?

Strength or muscle mass decreases with age after 40 and drops off the cliff after age 50; so this should not be that much of a surprise. Nevertheless, I felt I needed to start working on my strength to try and gain some back or at least slow down the loss of strength with age. The goal for the end of the year (2015) was to able to do at least half the number of pull-ups I did 45 years ago. Disappointingly, I did not reach that goal, but I came close. Months later, I still can’t do half what I use to be able to do, but I am working on it.

Progress on the number I can currently do in a row has plateaued, so I have tried doing weighted pull-ups to mix it up. Right now I am doing 5 sets of 5 with 30lbs of added weight. My 1 rep max weight is over 200lbs; 140lbs body weight with 60lbs added.

Pull-ups are an accurate measure of upper body strength, but the steep terrain of the Ridge Run demands extraordinary leg strength. Back problems prevent me from doing popular lower body strength training like dead lifts or squats. Instead, I ski (downhill) about 4 days a week. There is a place I affectionately call My Old Skiers Retirement Home that is my winter haunt. It is not a destination resort and is located far away from any population areas. During the week, most of the people there are retired old codgers that grew up skiing and still love to ski.

No high speed quads, no lift lines, no crowds, you can park next to the lifts, the locals are friendly and the place is oozing with challenging terrain. 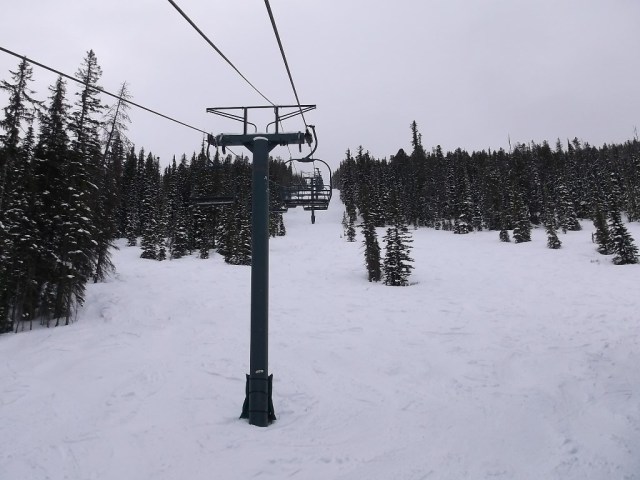 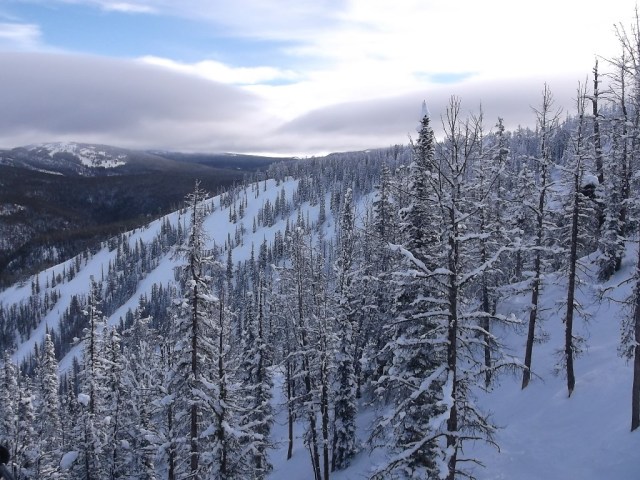 On average, I can ski about 6000 vertical per hour. It is like doing intervals. Ski hard non-stop down for a few minutes and rest and recover on the chairlift ride up. The short back side lift really gets the legs burning. The terrain is steep and technical and you only get a 5 minute rest on the lift. On the run serviced by the longer lifts, you can zoom down exposing the legs to huge sustained forces that only come with high speeds. Fastest top speed that I have witnessed verified on a GPS device is 85 MPH. There have been some serious accidents over the years and even some fatalities so you have to be fearless or foolish or both to go that fast. Fortunately the slopes are empty during weekdays. It is one thing to crash and wreck yourself, but to hit another skier – unforgivable.

The other winter workout I do is described here. Come Spring, I hope to start doing some trail running. We will see if this experiment in getting stronger pays off in a quality Ridge Run performance this year.

For some ideas on weight workouts for runners, check out the following video of Aston Eaton’s (decathlon world record holder) strength/power workout.