Hoka One One got a lot of things right with the Clifton. In my experience, it is Hoka’s best shoe yet. For several years, I’ve been using Hokas for some (certainly not all) of my trail running. The Cliftons are a much different and better shoe then the Mafates and Bondis that I have used in the past. My only experience is using the Cliftons on trails, where they work really well. In my opinion, they would be a good shoe for the Bridger Ridge Run.

On the road or track, the Clifton feels mushy and unresponsive and I prefer other shoes.

What is so Good about the Hoka Clifton?

Without the insoles, a size 10 Clifton weighs 7.8 ounces for the right shoe and 8.1 ounces for the left. This is refreshingly light for such a cushioned shoe. Hoka’s quality control seems to be unable to match weights left to right as I have seen this in nearly all their shoes. Their heavier shoe models can have even more egregious asymmetries. A second pair of size 10s I own interestingly weighs the exactly same. 7.8 For the right and 8.1 for the left. At least there is consistency between pairs. 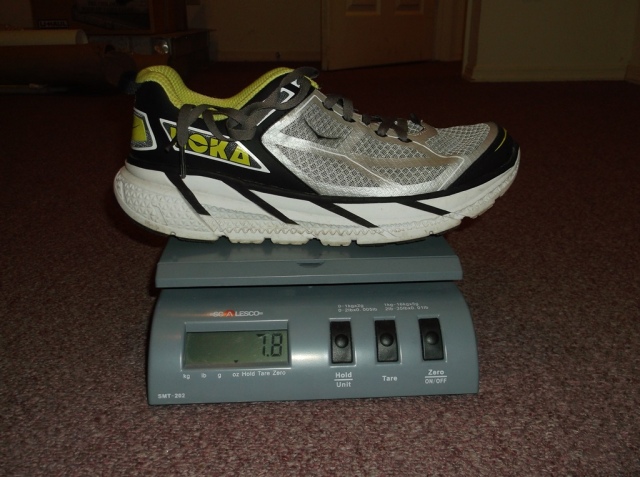 Compared to the say the Bondi B, the Clifton actually flexes at the ball of the foot. This is a welcome change from the board like feel of other Hoka and thick soled shoes. It helps relieve the pressure on the back of my heels when going uphill. After the steep terrain of the Bridger range, my feet are less beat up when using the Cliftons as compared to most other shoes.

The fit is a bit narrow and snug. The narrowness is the source of complaints about the Cliftons that I have seen in other reviews. The upper is thin flexible and cloth like. For me, the compliant upper requires a snug narrow fit to keep the shoe from being sloppy. The combination works.

Although not as stiff and thick as other Hoka models, the Clifton still has a huge amount of padding in the sole and offers protection from all but the biggest baddest sharpest rocks. The thin upper doesn’t offer much shelter from rocks hitting the sides of your feet. Fortunately, I have not had any run ins in that regard.

Shoes with a thick sole like the Clifton scare me because they tend to be unstable and prone to ankle twists. The Clifton is more stable than I expected. Perhaps the soft flexible shoe adapts and conforms to uneven terrain, rocks and debris in the trail helping the stability.

The stock insoles are very thin. This makes them very lightweight at 0.4 ounces. A more typical insole is close to 1.0 ounce. They are so paper thin that they tend to shift and wrinkle. Hoka uses double sticky tape to try and keep them in place. My preference is for a more built up insole giving my foot something to grip so I replaced the insoles.

The Clifton’s tongue  is very thin offering little padding between the laces and instep of the foot. My remedy was to replace the stock round laces with some flat laces that spread out the pressure and are more comfortable.

Perhaps the heel loop helps with putting the shoes on and off. It looks like a potential hazard to catch on a rock or debris so I cut them off. 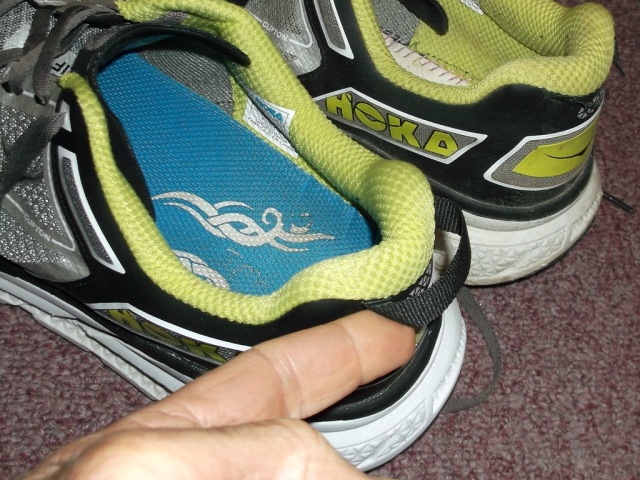 When I heard that Hoka was replacing the Clifton with the Clifton 2, I went out and bought another pair of the original Cliftons. I’ve been burnt to many times by shoe manufactures that bring out a revision and change the shoe in a direction not to my liking. Even Hoka is guilty of this. For example, the orginal Bondi was a great shoe, but with every revision it seems to get worse; at least for me. Skechers has evolved the revolutionary GORun into an conventional (unremarkable) shoe as they revised it with the GORun 2, 3, and 4.

Now that the Clifton 2 is out, from what I hear, the only changes are to the upper – that it feels and performs the same. Good, I’ll be able to still get a shoe I like a year from now. The Clifton 2 has a beefier upper with more overlays and a thicker padding on the tongue. This added a bit of weight (about 1 ounce heavier), but it should make it more comfortable and protective.

Here is a recent review of the Clifton 2 and comparison to the original Clifton.

Does the Hoka Clifton Grows Wider with Use?

When I got my second pair of Cliftons, I noticed the new pair was significantly narrower than my old pair. They were the same size, the same color, from the same store (Schnees) and have the same manufacture code. They even weigh the exact same amount. So they should be identical. But the sole width on the old pair was a full half of an inch wider at the ball of the foot than the new pair.

Studying and inspecting the shoes for differences, I came to the conclusion that my old pair had squished out and widened with use. This is the only explanation that I can come up with. Has anyone else had this experience? They certainly have developed more of a pronounced rocker sole as compared to the new pair.

Hoka Clifton gets Rockered With Use

It was back last fall that I got my first pair. Since then, I have used them in 2 trail half marathons (Disco Dash, Arizona Trail), 2 trail 12Ks (Lewis and Clark, Prickly Pair) and have probably another 70 miles of trail running in them. I do not run on the roads or treadmill or track. They still feel great. In fact they feel softer, more comfortable and more stable than the new pair. I took the new pair out for a 7 mile trail run. They seemed to have widened a little. Perhaps the old pair is only 3/8 of an inch wider now. It will be interesting to see if they actually do grow with use and eventually match the width of my first pair. Maybe the runners that think the Clifton is too narrow, need to try a used pair that has been pre-squashed. 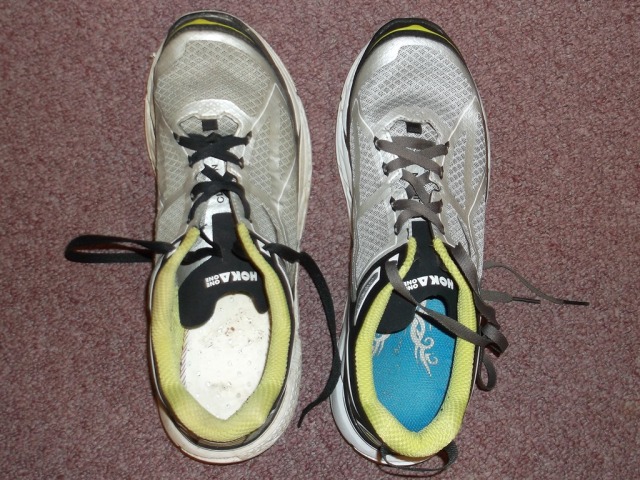