Bob Hayes is the oldest person to have completed the Bridger Ridge Run. Bob is a World War II Veteran. Given that World War II ended 70 years ago, you figure Bob has to be at least in his late 80’s. As time has marched on recently, there are less and less World War II Veterans still alive let alone as active as Bob. Bob is still running strong – competing in many races every year. 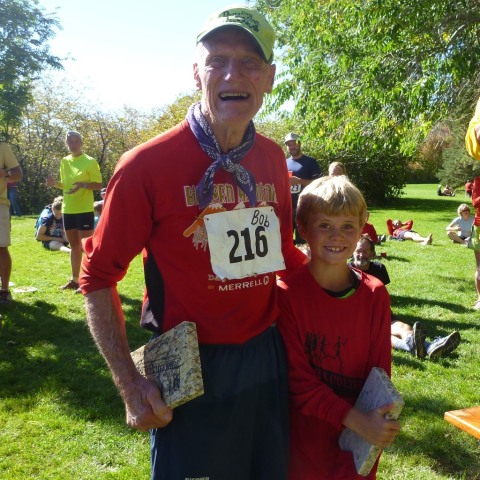 He still demonstrates an infectious enthusiasm for participating in life. Besides his passion for running, you will find him dashing off after a run to make sure he gets back to the Missoula area in time to go dancing.

At 29 seconds into the following video, you catch a glimpse of Bob dancing across the screen left to right. Of course he is wearing a race t-shirt. In this case, a dark green long sleeve.

For the last 30 years, Bob with the help of his sons, has been hosting a race on his ranch in Evaro Montana. The Evaro Mountain Challenge. Some spring, find a reason to journey to Western Montana and check it out.

Over the years, I have had the honor to get acquainted with Bob. He was the minister at my most recent Wedding – a dozen or so years ago.

Bob Hayes as Minister at Wedding

And nearly every year, I have had the good fortune to have been able to purchase from Bob some quality beef from his small herd of cattle. 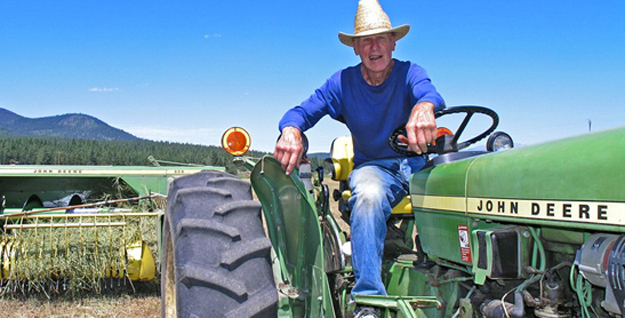 So why am I writing this. As a reminder, that there are some treasures of humanity in this world, like Bob Hayes. Remember to take the time to appreciate and learn from them while you have the chance.

Besides both being in World War II and runners, what does Louis Zamperini have to do with Bob Hayes. Well they kind of look alike, old Bob and Louis.

But what inspired me to write this piece was Bob’s Christmas card from last year. 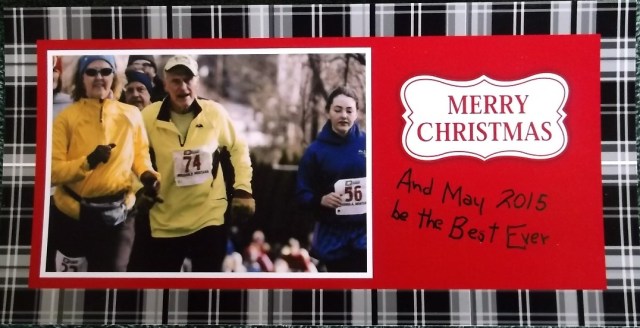 In it he mentioned the book “Unbroken” the biography of Louis Zamperini. Interestingly, I had just finished the book the day before I read Bob’s card. It is a tremendous book. Louis’ life and experiences are such a wonderful example of the human spirit’s will to live, endure, survive, fail, forgive and triumph over challenges. Running the Ridge and preparing for it are great exercises in endurance. Although compared to what Louis had to endure, Running the Ridge barely scratches the surface of the concept of endurance.

The movie Unbroken based upon the book came out last year. It is a good movie with beautiful cinematography, but it falls a little flat. It could have been a great movie. It could have been an inspiring timeless masterpiece. But it fails to capture the real essence of Louis and the transcendence of Louis’ spirit that got him through World War II and beyond. Unbroken the movie left out or treated lightly some of the most important aspects of Louis’ life. Such as Louis’ experiences of visions of the heavenly hosts, his bargaining with God and his promise to God if God helped him survive. It left out Louis’ conversion and miraculous healing of PTSD and alcoholism after the war and his act of forgiving his Japanese prison camp tormentors.

Scientific materialists get a little queasy when talking about God, spirit and the intangible. But it is these non-material spiritual aspects of life that give life depth, nuance, mystery and love. Without them, we are just biological robots, intelligent animals marching through a life that has no consequences beyond its limited physical existence.

There is much debate as to why Angelina Jolie left some of the spiritual parts of Louis’ story out of the movie, weakening its message. The standard explanation was the movie was limited in time and it just did not fit in. After preliminary screening of the movie with Louis right before Louis died, Angelina stated that “Louis was OK with leaving those parts out – if people wanted to know the whole story, they could read the book. This way, the movie was not preachy at all.”

For the most part, popular media and Hollywood prefer to ignore at best and ridicule at worst in its treatment of religion and spirituality – especially the Christian religion. So it is understandable that the movie makers of Unbroken chose to leave out some of Louis’ important spiritual experiences. Perhaps they thought it would have broader appeal and be less offensive to a secular audience. Unfortunately in doing so, they rendered the movie less impactful than the book.

A Chance Encounter with Louis Zamperini

A dozen years or so ago, I was in southern California visiting my youngest daughter. She was preparing to move to Hawaii to go live with her brother. If you are on a budget, you can’t take much with you when moving from the mainland to Hawaii. So one of the preparatory steps was to have a yard sale and sell as much of her stuff as possible. As I was standing around trying to be helpful and not look bored with the yard sale, I noticed an older gentleman who was out for a brisk walk. I could tell he was not interested in buying anything, but for some reason perhaps just curiosity as to what was going on, he saw the yard sale and zeroed in on me. Perhaps it was because I was the only “older” person there. Or maybe because he realized I was a peripheral part of the goings on and chatting up me would not take anyone responsible away from the sale proceedings.

Attracting the attention of strangers is not new to me. For some reason, from harmless panhandlers, to street wackos, to TSA agents, to muggers, to predatory kidnappers (yes) I seem to be the first to get singled out and attract attention. I’ve never figured out why. My looks, my size, my posture, my energy? Over the years, out of self-preservation, I have learned to be a bit guarded and distrusting of other people.

Anyway, this older gentleman came up to me and seemed fairly harmless so I was only partially guarded and skeptical of his intentions. His purposeful walk and his clothes betrayed the fact that he was not a street wacko or panhandler. He looked kind of like Bob Hayes. He asked what was going on and why the sale? I explained that my daughter was moving to Hawaii. She had an opportunity to live with her older brother. He was a Naval Aviator stationed in Kaneohe Hawaii. At the mention of this, you could see this guy’s thoughts sore off to other places and times. He opened up divulging that he was stationed in Hawaii during World War II and flew in B-24s. I said my step son flew P3s – a reconnaissance plane. He now introduced himself as Louis and said that his plane went down in the Pacific and he spent 47 days adrift in a life raft. It took me awhile to process the concept of being stuck in a life raft for 47 days and if it could be true. I don’t remember what I said in reply, probably something respectful but perhaps giving away a little bit of skepticism I had regarding this fact. Besides, he was an old man, a stranger, and perhaps senile? Out of his pocket he pulled out a piece of paper that had a short write-up of his World War II experience. I glanced at it, but did not read it till later. I wanted to keep my eyes on Louis.

I introduced him to my daughter explaining that Louis had been stationed in Hawaii during World War II and had survived 47 days adrift in a life raft after his plane went down in the pacific. She was distracted by customers at the yard sale, but did acknowledge that was an impressive accomplishment and she was moving to Hawaii. With that, Louis seemed satisfied and continued on with his walk.

That was the end of my chance encounter with Louis Zamperini. At the time, I did not know who he was, I was not a student of track and field pre-World War II. I was unfamiliar with the story of Louis Zamperini. That piece of paper got tucked away somewhere in my files. Over ten years would pass before I thought of that chance encounter again. Last spring, advertisements for the movie Unbroken and the whole surviving 47 days adrift in a raft story was brought to my attention. There was something familiar about the story – especially the part about surviving 47 days in a raft. My memory meeting Louis was triggered. We did not talk long at that yard sale. He did not mention his running, his prisoner of war experience, or his Christian conversion and ministry. All he mentioned was his surviving 47 days a drift. If I wasn’t so guarded and skeptical, perhaps I would have recognized what a gift that chance encounter was and spent a little time walking and talking with Louis Zamperini.

However humble or grand, everyone is special and has a story. You never know who or why you cross paths with someone. Don’t let any opportunity slip away.