The 2013 Ridge Run saw Daniel Kraft return from his second place finish in 2012 and totally dominate the 2013 field. His winning time of 3:14 was 20 minutes faster than the chase pack of the next finishers.

As forecast, there were indeed some surprise performances in the Woman’s field. Kaitlin Macdonald in her first Ridge Run notched a victory. She ran 45 minutes faster than her estimated time of 5 hours and was a surprise to more than a few people.

Unfortunately the registration committee placed Kaitlin in the second wave based on her estimated time and her own suggestion that she be in the second wave. So a dramatic dual between her and second place finisher (last year’s winner) Minde Erickson never played out.

It is a bummer when the first person that crosses the finish line is not the overall winner because of the wave start scenario. This is the second time this has happened. But in this case, given the current way runners are broken up into waves, there really was no way to prevent it. Time trial races and races with wave starts will encounter this situation from time to time.

At the start, Daniel told me he had injured the ball of his foot a few weeks previous to the race. He pointed out the Hoka shoes he was wearing explaining that running in Hokas did not aggravate his injury. 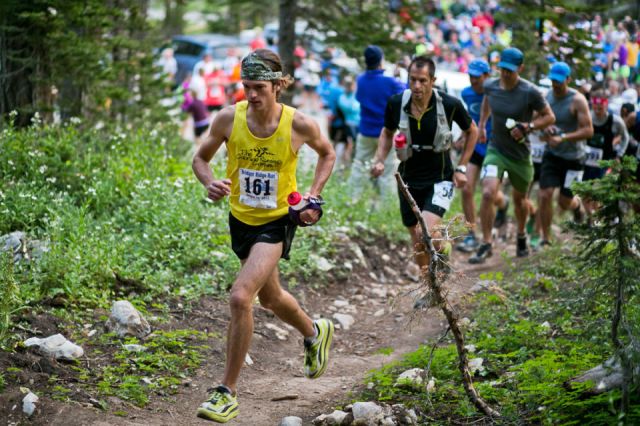 Granted Hokas are very comfy and protective, but their increased weight and sponginess may have slowed Daniel down a bit. In my experience, it does take a bit more effort to run fast in Hokas, especially on the flats and uphills. You can bomb the downhills and maybe that makes up for the performance penalty on other parts of the course. It is hard to calculate. Hoka’s thick sole tends to torque your foot around on irregular footing requiring a bit of extra work on rocky surfaces.

Hedging his bets, Daniel also said his training had suffered from being injured. Most of us know how that goes. And we all like to bring other people’s unrealistic expectations back down to earth. Nevertheless, Daniel harbored the goal of breaking 3 hours and went out fast with that goal in mind. The article in the Chronicle mentioned his split time at Sacajawea as 19 minutes. If this time is accurate, it is not just blazing it is superhuman!

The trail up to Sacajawea is now a little over 2.4 miles and gains 2100 feet in elevation. Getting there in 19 minutes would mean running faster than 8 minutes per mile on a steep uphill averaging 17% grade. It sounds like Daniel used a jet pack. To put things in perspective, 8 minutes per mile is the pace the top world class athletes run the Mount Washington road race. And Mount Washington is only an 11% grade and on a paved road not a trail.

It took me twice as long, 38 minutes, to get to the top of Sacajawea! I asked Daniel his split to Sacajawea. He did say he was faster than last year and went out too hard, but did not know his exact split time. Not to degrade Daniel’s performance, but I do not fully trust the Chronicle’s accuracy regarding the 19 minutes and I am curious as to where that number came from.

I’m just speculating, but to logically explain were the 19 minute number came from, consider these possibilities: Perhaps 19 minutes is the time it took Daniel to get up past the Sacajawea basin pass and begin his climb towards the peak and become recognizable to the people on top of Sacajawea. Or maybe his time was actually 29 minutes to get past the top of Sacajawea. (Still incredibly fast times!)

Daniel mentioned that after Bridger Bowl he struggled with fatigue and slowed enough that the goal of 3 hours slipped away. He figured that lack of prior training and starting the race at such a fast pace conspired against him; the result being nearly 10 minutes slower this year.

Every year is different. Last year had near perfect conditions and record breaking fast times. This year had more typical conditions and was a little slower for most every one for a host of reasons. Only 8 people ran under 4 hours this year compared to last year’s 16.

First and foremost, the course is longer making it obviously slower. The start has moved down to the Fairy Lake parking lot. During the race, I checked my watch when I got to the point where the new trail merged with the old trail. It read 3 minutes 45 seconds. Given that it probably takes 30 to 40 seconds to get from the old trailhead location to this same trail junction point; the net increase in time for me was a little over 3 minutes compared to last year. Factoring increased fatigue later in the race, the real difference is probably slightly more.

2013 saw the race begin with slightly overcast and hazy conditions. The cloud cover kept the warmth in overnight and the temperature was a bit warmer than usual at the start. Lingering clouds in the first few hours of the race kept the sun from heating things and temperatures remained comfortable for most of the race. It did warm up later in the afternoon. People out on the course longer than 5 hours did experience some heat challenges in the later stages of the race.

There was very little wind this year so it was not much of a factor, unless you were warm and wished for a cooling breeze. Contrast this with last year’s, 2012’s anomaly with a mix of a rare tail wind and cooling cross breeze during the race.

The weeks leading up to the race saw dry and warm conditions. This resulted in dry dusty and fairly loose pebbly trail conditions. This makes the footing a bit less secure and may have made the course a little slower compared to the last few years that were blessed with rain the day before the race.

2013 marked a milestone by having the first person with a prosthetic leg complete the race. Kraig Kempt earned that distinction with a time of 8:23. At the award ceremony, he appeared in good spirits and did not show any indication of just how hard it must have been to negotiate that terrain with a prosthetic leg.

The only person I am aware of at this time that took pictures was Dave Skelton of the Bozeman Track Club. Dave positioned himself about a mile up from the start in the basin below Sacajawea. He mentioned to me that most everyone was looking down at their feet as they passed him and it was hard to get good shots. I explained to him that people are looking down focused on where they put their feet so they don’t trip!

Look for Dave’s pictures on his Bozeman Track Club website. As of August 21, he had not yet posted them.

Please comment if you have knowledge of any other photo galleries or want to say anything about the 2013 race.

Following is a video taken at a water station near the finish above the M.

Here is a series of videos from this year’s race. A lot of work went into creating this by carrying a camera out on a fishing pole. These videos show major portions of the course and would make a great tutorial for those not familiar with the terrain.

Here is another video taken just north of the Bridger Bowl aid station looking north as the runners approach.