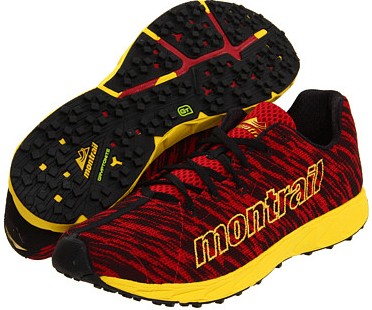 I’m always looking for a running shoe bargain. This past winter, I stumbled upon a pair of Montrail Rogue Flys at a liquidation sale for under $30.00. So I snatched them up. After a few runs, I was glad I did and went back to buy a second pair. In the ensuing weeks, the priced dropped to under $20.00. I’m not sure if Montrail is discontinuing them or what the reason was for the cheap price, but they are a great lightweight trail shoe.

They are very similar to the Montrail Rogue Racer that I reviewed last year. The only difference between the two models is the Rogue Fly’s upper is not as supportive as the Rogue Racer. The Flys are also an once or two lighter depending upon your size.

If any of you were around 40 years ago and remember the Nike Waffle shoes, the Rogue Fly is a modern day reincarnation. From the waffle outsole to the midsole to the soft compliant nylon upper, the Rogue Fly is the closest thing I’ve run in lately to a 40 year old Nike. I’m not poking fun hear, I’m complementing! They even have a similar longitudinal seam in the upper over the toes – although the Nike’s seam is wider. What is old is new again!

A Light Shoe Makes a Difference

In my first run in the Rogue Flys I did the outer loop at the Lewis and Clark caverns state park. It is about 7.5 miles and is quite hilly. The Rogue Flys felt light and quick. It ended up being the fastest I had actually ever run that particular trail. Was it a harbinger of good things to come from running in the Rogue Flys?

As this Spring progressed, I ran a couple races in the Rogue Flys. I’m glad I did. They worked well. The first was the Mount Lemmon Half Marathon in Tucson. This is a road race with 2200 feet elevation gain. I had been struggling with calf strains all spring and was not prepared for the race. But I had signed up for it and was determined to do it. Normally I would have worn my Sketchers GOruns for a road race. But the Rogue Flys have a higher heel with respect to the toe than the Sketchers so I figured wearing the Flys would put less stress on my messed up calves.

Going into the race, I reckoned I was in about 1:35 half marathon shape for a level half marathon. Given the 2200 feet of climbing and factoring 10 minutes extra for every 1000 feet of climbing (a rule of thumb that works well for me), I projected a finish time of about 1:57. Looking at past years results this would still be competitive with others my age. So I set my goal to break 2 hours and considered that a worthy goal. Of course, I had a bet with my wife on my finishing time. Seeing me hobbling around the weeks leading up to the race, she bet that I would not be able to break 2 hours.

When it comes to racing, some days just turn out better than others. This was one of those good days. During the race, I carried a water bottle and carried and ate a pack of Clif Bloks. Since this was a road race and had aid stations, it was totally unnecessary to carry my own goodies. But in doing so, I never had to stop and just kept on rolling. Eventually I rolled to a time under 1:47 – a surprise to me and to my wife that still owes me on that bet.

My second race in the Rogue Flys was the Wulfman Continental Divide Trail 14K. The Wulfman race employs a staggered time trial start to avoid congestion. The starting order is based upon ones predicted time. This would be my fourth time doing the race. At my age (mid-fifties) the overall trend is to slow down. PRs are typically a thing of the past for me. Given my lack of training and my ever increasing age, I figured I would be a bit slower than last year and padded my predicted time accordingly. Last year I ran in the similar but slightly beefier Rogue Racer so I did not think the Rogue Flys would offer much of an advantage. As it turned out, things went well, and I actually ran a PR for the Wulfman course. Was it from the lighter more flexible Rogue Flys, or was it because the weather was cold, wet and miserable and I just wanted to get the race over with? Hard to say, but it is a pleasant gift to set a PR in one’s mid-fifties especially after decades of running. I must conclude those Rogue Flys worked well. 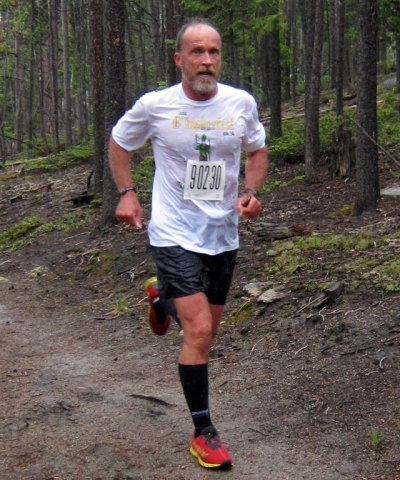 Rocking the Rogue Flys in the Rain Wulfman 2013

The Rogue Flys have the identical outsole as the Rogue Racer. As I mentioned in that review, it offers surprisingly good traction with the exception of slippery mud and ice and snow. I’ve been training with them on the Ridge Run course and they grip pretty good even on the dry dusty gravely sections that can get slippery. They fit true to size. My only complaint is that the upper is a bit mushy – even more mushy than the Rogue Racer upper. This only is a problem on very rugged terrain and side hills where your foot tends to slide around a bit.

If you are light and quick on your feet these shoes might work quite well for the Ridge Run and worth considering. Nevertheless, given all the sharp rocks and side hill terrain on the Ridge Run course, my personal preference is for a beefier more protective shoe. So I am fairly certain I will not be using them for this year’s Ridge Run.

The less weight on your feet, the faster you will run. So as a guideline:

Choose the lightest shoe that you can comfortably and safely run in.