Recently I picked up a pair of Brooks PrueGrit trail shoes at the Bozeman Running Company (or on Facebook). Following is my initial impressions after some winter trail running.

The PrueGrit fits true to size – maybe just a smidge on the long side. I ended up getting a size 9.5. I wear a size 10 in more brands of shoe than I take in a size 9.5. For comparison I wear a 10.5 in the Hoka Bondi B. If later this year, I notice that my toes are jamming the front of the shoe in my size 9.5s when descending a steep trail like Baldy to the M, then maybe I will invest in a size 10. The extra length of a size 10 may offer me a bit more of a length buffer and protection from black and blue toenails on steep descents.

They fit comfortably snug without having to lace them real tight. I like a shoe that fits well and keeps your foot centered over the sole even when loosely laced. The PrueGrit fits this description. They are a mid-volume shoe. They grip your feet, but still allow enough room to put in a custom insole or foot bed or stack two insoles. I did notice some pressure on my left instep where I have a boney bump.

Cutting off the Nav Strap and a modified lacing scheme eliminated the pressure on my instep. The Brooks Nav Strap appears to be pure gimmick. As far as I can tell, it offers no benefit and just gets in the way of the lacing.

Cutting off the Brooks Nav Strap

After some steep uphill walking and running, I did notice a bit of pressure on the back of my heel. The PrueGrit’s heel cup tends to be a little shallow. It does grip the heel just enough to keep your heel from lifting when going uphill. The flexible sole also helps in this regard (keeping the heel from lifting).

The PureGrit weighs in at 9.6oz for a size 9.5. This makes them comparable to the Nike Zoom Trail or the Inov-8 290. They are lighter than traditional shoes, but heavier than the minimal offerings. 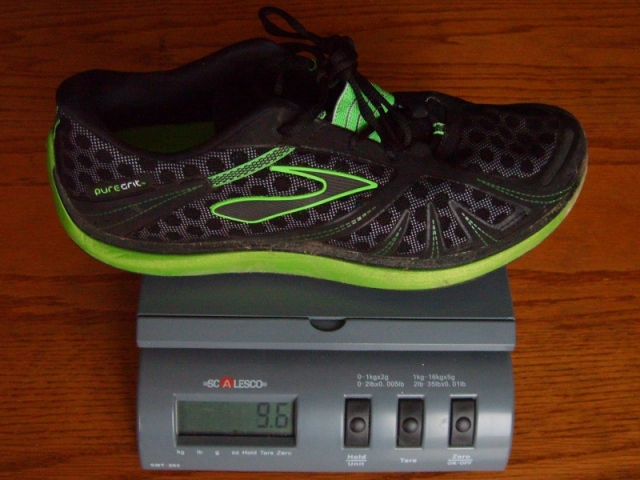 As long as the surface is fairly soft where the lugs can bite in, the rubber outsole offers terrific grip and traction. It is a hard rubber and offers lots of durability. I’d prefer Brooks had used a sticky rubber. As is, the PureGrit works on all but the most slippery surfaces.

When things get really icy, you can always use traction devices. A medium pair of Micro Spikes fit the size 9.5 TrueGrit like they were made for them.

There is a split in the sole up by the toes and back at the heel. This split is supposedly allows the sole to flex and torque a bit at the toe to adapt to terrain. Perhaps, that is the case, but I think the splits are more gimmick then function. The entire sole flexes and torques easily and along with the convex shape of the sole, the shoe rolls naturally with uneven terrain. The convex sole and the low heel make the PureGrit very stable when running over uneven and rocky terrain. Your foot naturally rolls instead of catastrophically collapsing. Consequently, it would be much harder to sprain an ankle in the PureGrit as compared to a more traditional thick sole high heel shoe.

The PureGrit does not have a protective rock plate and I did feel some sharp rocks poke me in the fore foot (ball of foot). The out sole is thick and hard enough to offer protection under most circumstances, but you are going to feel some of the sharp limestone rocks that are a part of running in the Bridger range.

When standing, the PureGrit’s sole feels rockered from front to back – kind of like a mild version of the Skechers Shape Ups. When standing and walking, I noticed that a lot of my weight is distributed through the arch of my foot instead of my heel. It feels like the sole is thicker under the midfoot, then under the heel. Imagine standing barefoot with a log crosswise under the middle of your foot. This is the natural result of the heel not being as thick as most shoes. It is as if the heel were ground away and partially missing. It is!

When running on level ground or when going uphill, the lack of a heel helps you to adhere to a midfoot or forefoot foot strike. It gives the shoe a nimble quick feeling.

It is difficult to run down steep terrain and land on your fore foot or mid foot. Steep descents tend to force you to land heel first. When running downhill on steep terrain in the PureGirt, the lack of a thick heel or cushioning in the heel gives them a harsh jarring ride. A lot of impact force was transferred to the bottom of my foot right in front of my heel. This is the exact spot that tends to get sore from Plantar Fasciitis (PF). I have to conclude that fast pounding downhill running in the PureGrit tends to aggravate my PF. Maybe I can remedy this with some insole modifications or a little extra cushioning in the heel.

Similar to the Nike Zoom Trail

The PrueGrit feels quite similar to my favorite Ridge Run shoe the Nike Zoom Trail. The Zoom Trail seems a bit dated in this modern era of zero drop shoes but they still offer most of what is needed for the rocky rugged trails of the Bridgers. The PrueGrit feels like a more flexible Zoom Trail with the heel ground down and the rock plate removed.

Back in 2008 when the Zoom Trail was still available it was the shoe used by Max King (the reigning 2011 World Mountain Running Champion) in the Trans Rockies stage race. It is too bad that Nike no longer makes the Zoom Trail or something similar. Presently, the Brooks PureGrit is as close as you can get.

The Brooks PureGrit is a medium weight nimble trail shoe that offers a snug fitting upper, stable feel on rough terrain, adequate traction, durability and protection from all but the sharpest rocks.

The sole feels thicker under the arch than at the heel. This helps you avoid heel striking when running on level terrain or when going uphill. But the lack of cushioning under the heel gives the PrueGrit a harsh hard ride in situations when heel striking is hard to avoid such as when running fast on steep downhills.

This shoe may be a good choice for the Bridger Ridge Run. My only reservations for using it on the Ridge Run are its lack of a rock protection plate and the harsh feeling they exhibit on steep downhills. These two short comings may be remedied with some custom insoles and adding heel and metatarsal protection pads.